For the previous “Date with Dad” post – Read here

For the last few years my dad has lived a crazy schedule…this has truly been a source of “frustration” for my mom as she’s always been the type to rise BEFORE God instructed the sun to peek through. It’s not unusual for her to type her family an email by 5:15am and mention a list of things she’s already accomplished (more than I plan to EVER do before 9am).  My dad…well, quite the opposite.  His “stay up all night and sleep till noon if I want to” attitude made “Let’s go to lunch at 2pm” a real possibility – sometimes I think it was actually his breakfast!

My dad has also become a “creature of habit” and my parents tend to eat at the SAME PLACE for months (and months) and then decide they are “done” and move on to some other spot. But- Corner Bakery…it’s been a staple…they have actually been going there for years.  One of the reasons is that they have newspapers available for free…and while my dad has always LOVED reading the paper, he swore off ever giving the Dallas Morning News a penny – since he felt they were “too liberal” (well, there was that one year he received it after having some young kid sell him a subscription in Sam’s but…that was just to help the kid out!). 🙂

So- on February 4th we headed to Corner Bakery and enjoyed a nice lunch (newspaper nowhere at the table!).  We talked about things happening with the kids and he (as he always did) asked me about work/what was new with the staff, etc.  I always love when he asks me about specific friends of mine…often not remembering their names but ALWAYS remembering details of when he last saw them or something unique that gives me the ability to know who he is asking about.  Today, it was my friend…”The really pretty girl that they had do the announcements in church…the one that some really good man needs to snatch up…is she dating anyone now?” (That would be my friend, Jenn!).

As we sat eating – he kept saying, “I’m so cold…aren’t you cold?”. This wasn’t anything alarming…my dad has been cold for YEARS. But- he finally couldn’t stand it, said he was finished (luckily for me, I actually was!), and we headed to the car.

As I helped him in (quite the process these days), he gave his sweet “Lynn Grin” and said, “Ohhhh…the sun feels sooooo good! Let’s just drive for a little while – turn right and I’ll tell you when to turn next!”.

I’m really ok with “taking orders” (especially from my dad) but – the problem with this plan was that he also tends to fall asleep instantly in the car. I was a little concerned we would end up in Houston before he woke up, so- I pressured him for some directions upfront. He finally agreed to tell me that, “I want to go to “The Big Walmart” – I’m ready for the BIG CARTS!” (again…read here)

We arrived and I got him situated – and warned him to drive slow and stay alert. I could just see an entire display being wiped out by this speed demon (almost) 82 year old!  I needed some shampoo so asked him where he was headed…he pointed straight ahead and told me he would drive and then wait for me at the end of the long aisle.

I grabbed shampoo and 15 seconds later headed down the aisle…searching…for the man in the cart….NO WHERE in sight.

THIRTY minutes later, and EXHAUSTED from power walking ALL OVER, I found him in the opposite side of the store – back in the automotive department. I felt like a young mom who had just frantically looked for a lost child…and then you find  them and don’t know whether you want to hug them (cause you are so relieved) or hurt them (cause they wandered off/freaked you out).  I  ran towards him and said, “Dad- I’ve been all over the store…WHERE HAVE YOU BEEN??? You said you were going to wait for me at the end of the aisle??”  His head popped up and said, “Well, I didn’t know that aisle was in the refrigerator section and I’ve been driving around looking for a warm spot…GET ME OUT OF HERE…I’m freezing!”

We got in the car and headed home…with the heater BLASTING. On the way we were stopped by a train that carried military jeeps/tanks/equipment.  It seemed to go on forever – long enough to have a conversation about his love for our country and for me to ask him a question or two about his military service.

He jumped in, at one point, to say – “What’s the date today? The 4th?  February, right?  OK, well – next week…don’t forget to remind me that I have to get something when we go out.”

To read the original “Date with Dad” post – read here

Follow This too shall pass… on WordPress.com
Join 61 other followers 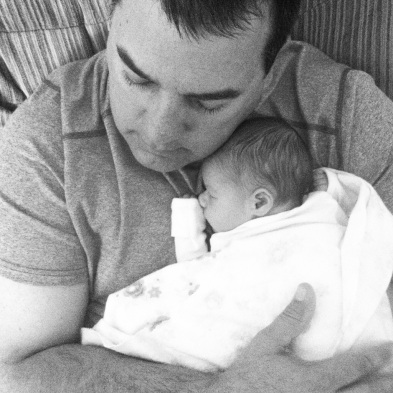